Yesterday was a perfect day for riding. I made an impromptu run up to Gates Pass in the morning for some paved twisty fun.

View from the top:

Then I ran down to Sahuarita to meet Aaron for trail exploring.

We made a special stop at this great hill jump James had shown us on the last ride.

Aaron joined in, testing the suspension on a stock KLR. 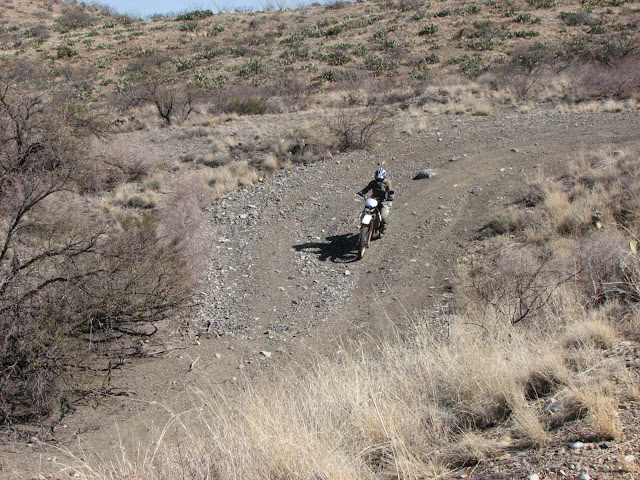 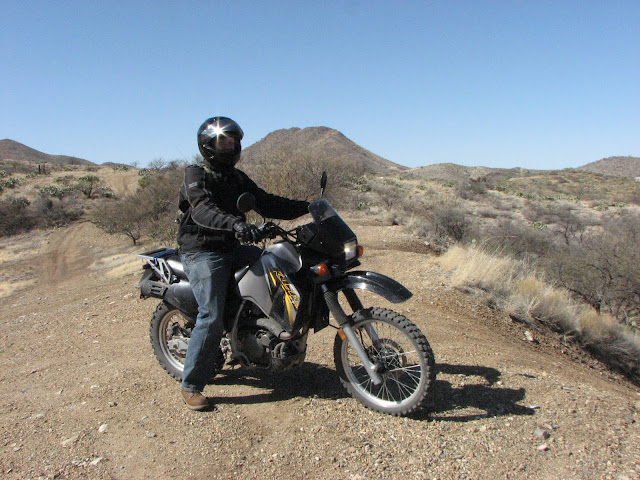 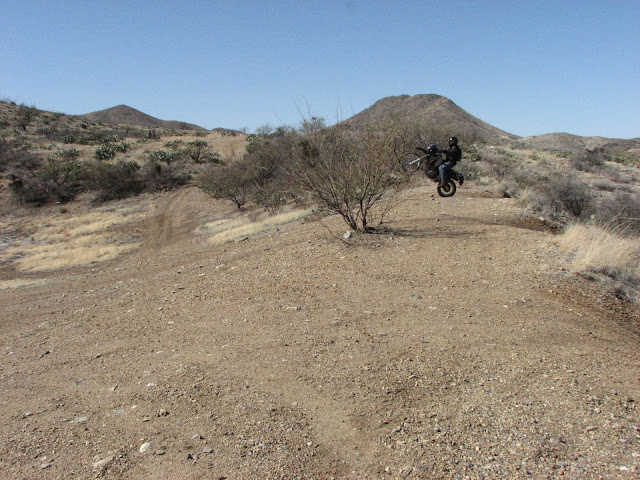 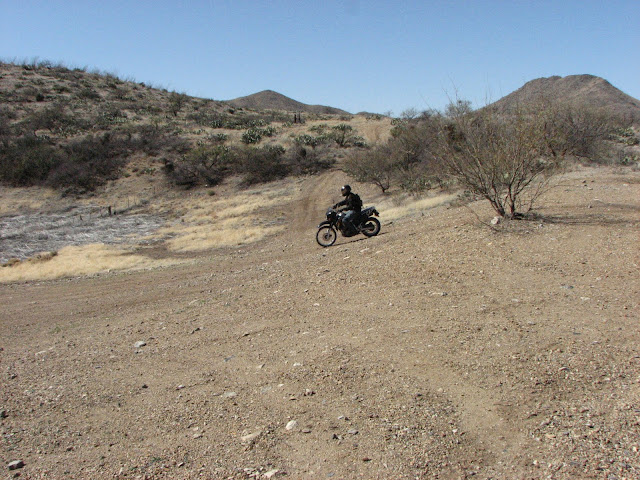 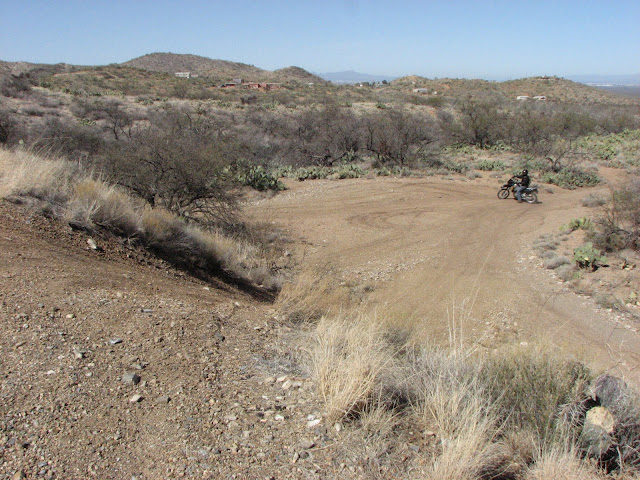 I was riding a little further down the road to turn around (so I could get a running start) and at one point got a little stuck turning. So I hopped off to muscle it around. Well, I jerked it a little hard and the bike fell over with such vigor that it catapulted me over the top of it, still holding the handlebars and I did a full somersault!

After doing that jump about a million times, I got much better at the turn too. Yay for practice! 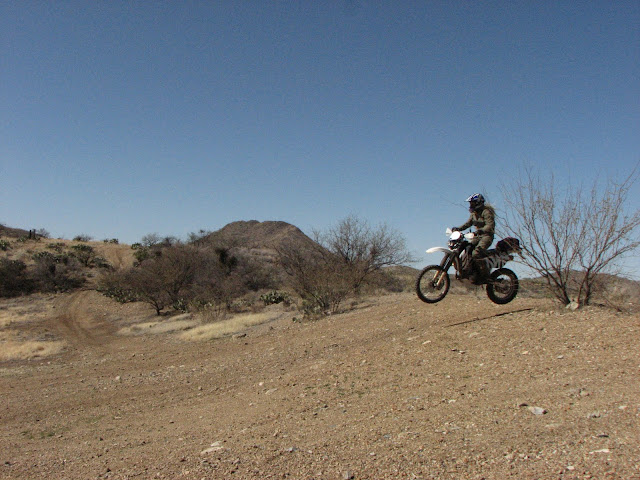 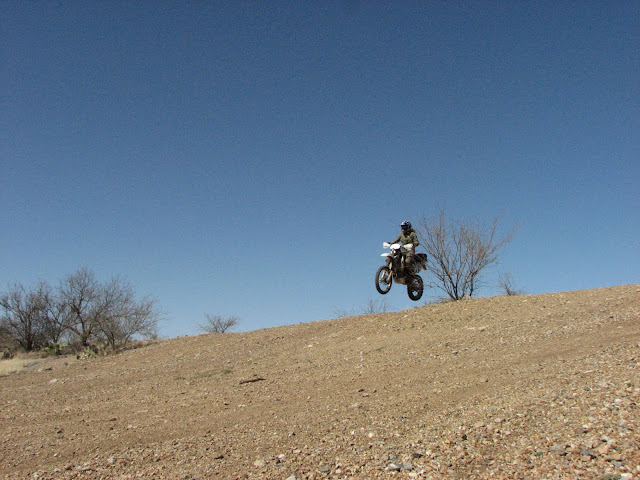 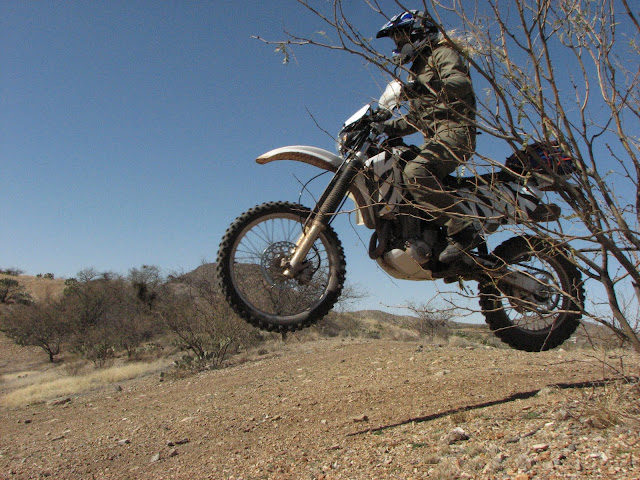 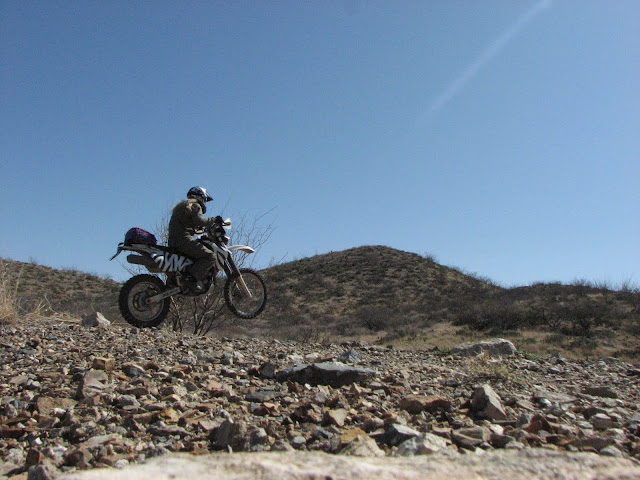 I know I’m not actually that far off the ground, but man it felt like I was flying! 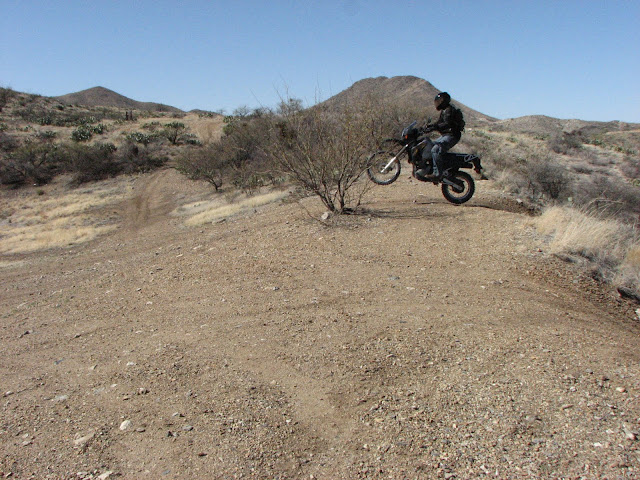 This bike is pretty much the most fun thing ever! 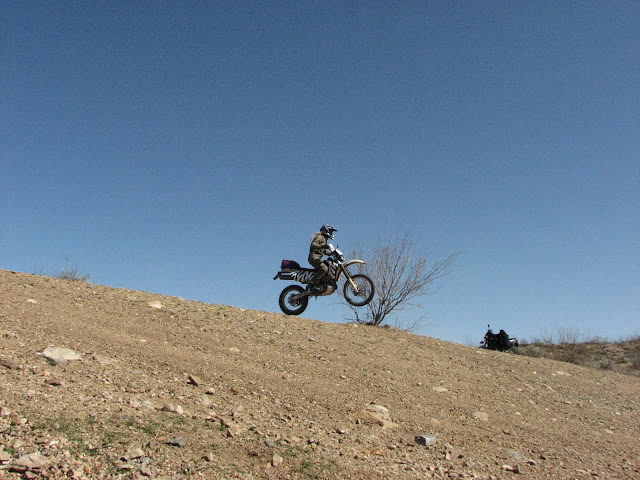 I was all paranoid about going down the steep part the first time, but after a few passes, it was total cake! 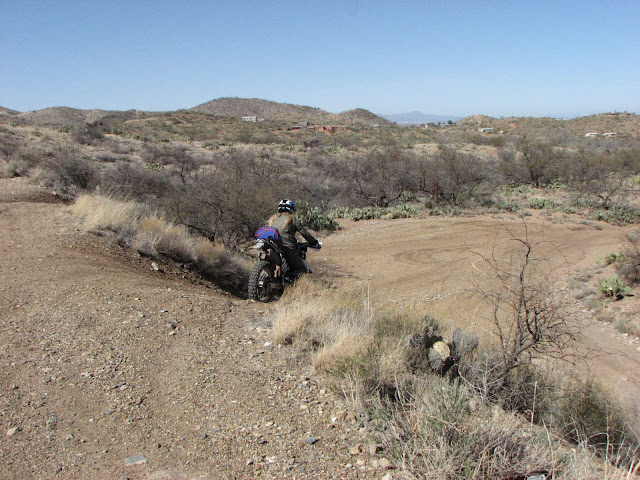 Are you tired of jumping pictures yet?! TOO BAD! 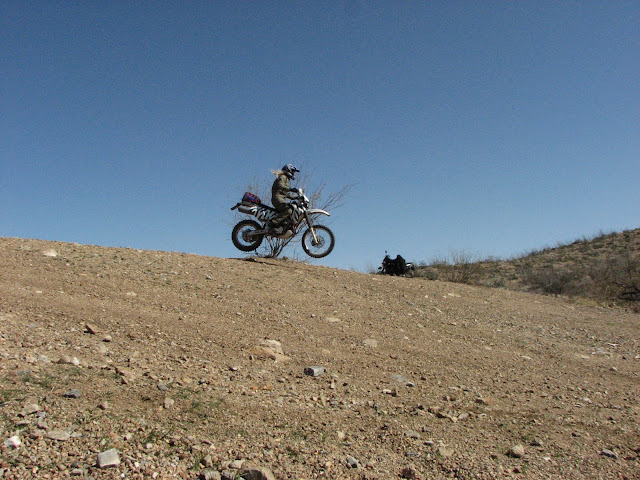 We went off exploring random roads, which led to some rocky rocky climbs, which dead ended for rocky, rocky descent practice. It went pretty well, but I did bounce off a rock and drop the bike once. I somehow jumped off of it as it went down though, so that was cool. I’m getting experienced at dumping it without injury.

The rain had made the roads all mucky, but by now they had mostly dried, leaving some weird dirt ridges in the middle of the road. 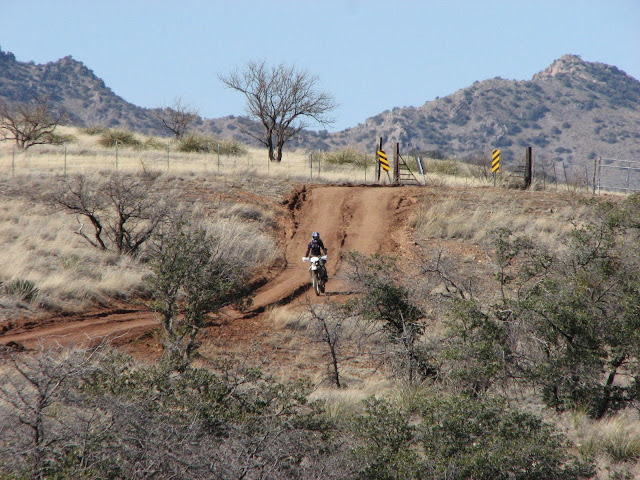 Take note of that little powdery ridge in the middle… 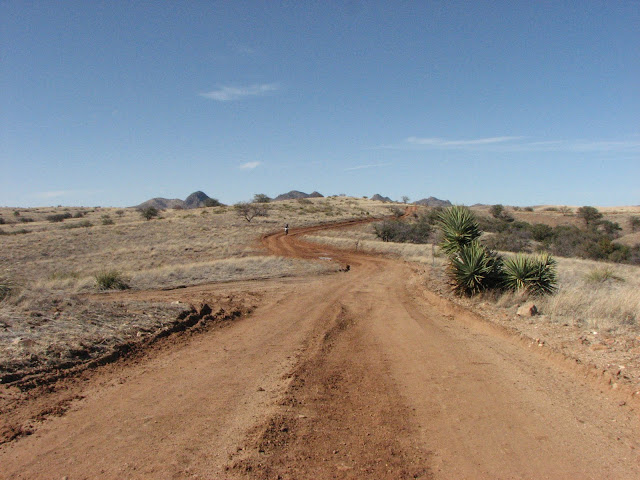 I thought it would be funny to charge at Aaron as he was taking pictures. I hit that little ridge and started flaily wildly. I gave him a mini heart attack, but I stopped in time without crashing and he got this picture. 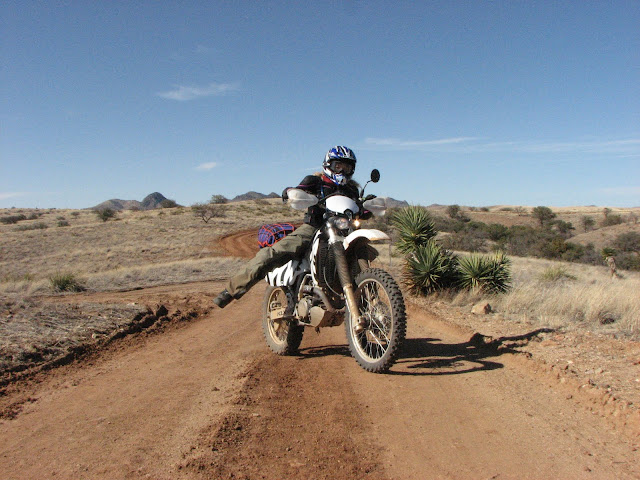 We rode on through Fish Canyon and Madera Canyon… 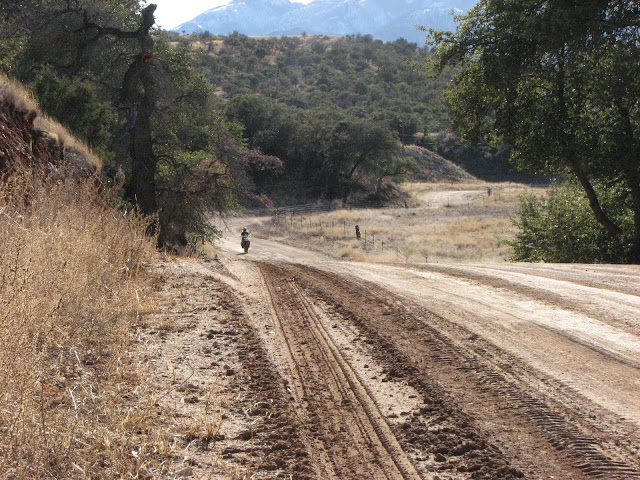 I found some puddles to splash in…

There was a pretty little waterfall down this rock face. I have a more…stoic…picture of Aaron standing by it, but this one is hilarious and I can’t help myself. 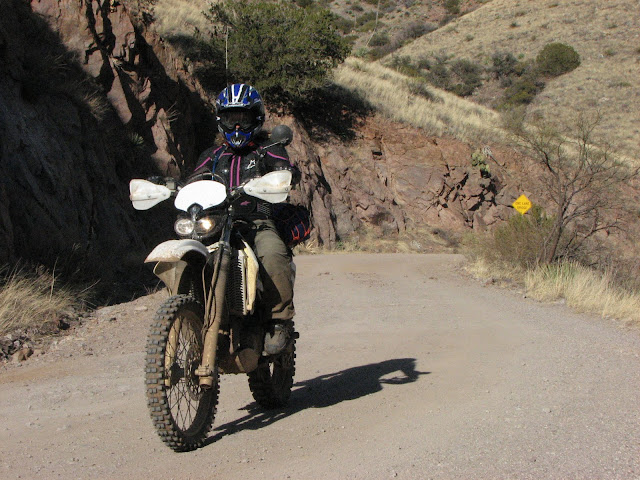 We rode all day and it was perfect weather the whole time. 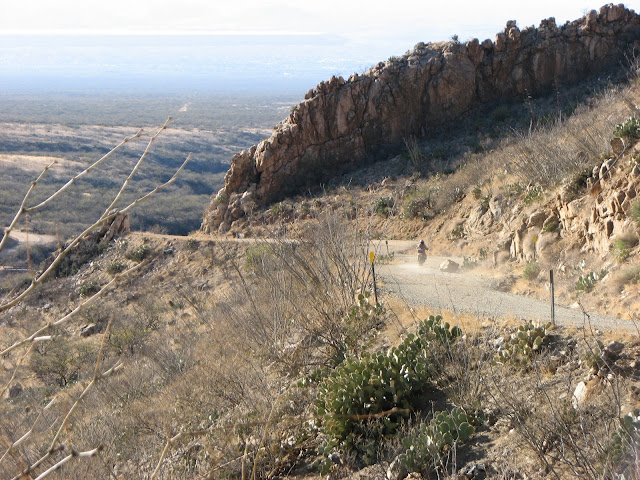 I felt really confident on one of the last dirt sections home. It was nicely packed from the rain, but fairly twisty with nice dips. I think it was my fastest run on that kind of terrain. 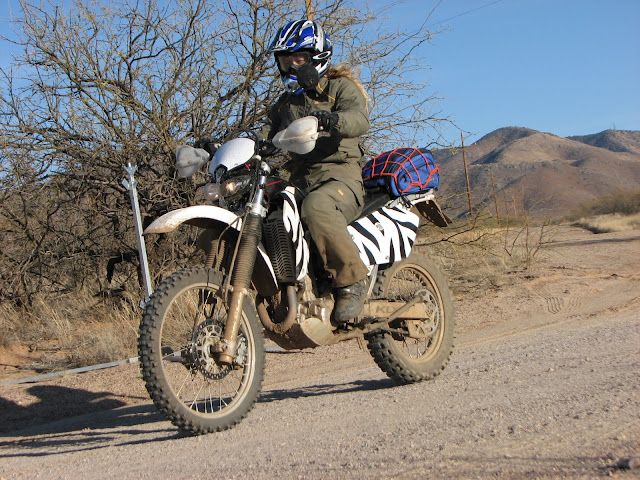 Thanks for riding out with me Aaron and for all the great photos!

This one is my favorite:

I woke up this morning feeling like I’d been hit by a truck. Maybe it was all the jumping or just going from sun up to sun down like that, but I think I got a workout! It was damn fun though and totally worth it!

2 thoughts on “Jump Around!”