I had hoped to get an early start Friday, but one of my classes had a mandatory quiz, once I finished that up I met with James to head out to the Desert Daze Rally 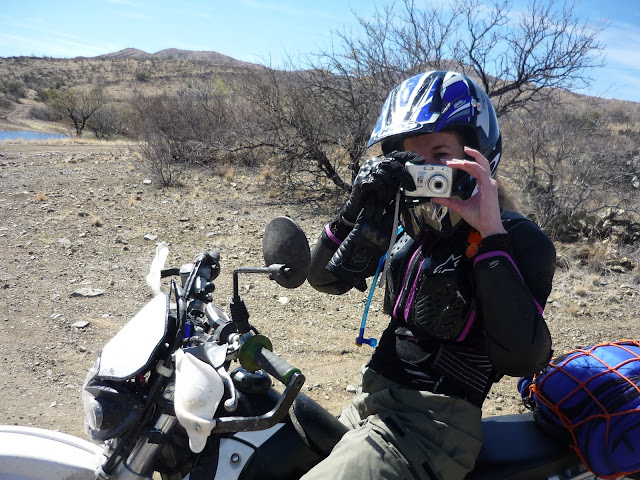 He had google mapped a route to take us all the way there almost completely by dirt. Genius! If you are going to ride a distance like that, may as well make it fun!

It started out on some familiar trails Southeast of Houghton and Sahuarita Rd. We popped up over my favorite hill jump (didn’t stop for pics this time) and onto the ‘lake’. 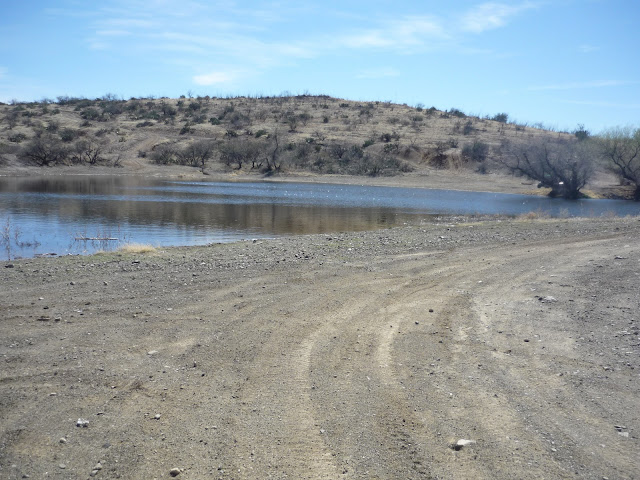 This pic and some others by James
From there we rode in the wash under a bridge/culvert thing. Here’s the mouth of the wash where it spits you back out onto a road again.

Takin’ a break under a tree.

You can see how reflective my stripes are in this pic!

We rode some twisty dirt that turned into a ribbon of twisty pavement.

The road was nice and varied, not just in texture, but color.

We missed a waypoint.

We started following a gasline road and it crossed these deep, steep and rocky gorges. Ever since the Sibley Mansion incident, these things have made me a bit squeamish, but the first one wasn’t too bad and they got just a bit worse one by one.  James asked if I was comfortable continuing and I said “yeah, it’s not completely absurd yet.” I had just gotten my SPOT back from recall and I was feeling pretty good about attempting somewhat risky terrain.

…but then I came across this one:

Pictures always flatten things out, but I think that tree in the middle gives you a good sense of how steep that drops off.
“Okay, now it’s absurd.”
We just passed a fork and I declare we should try that way instead.
Then I drop the bike turning around. 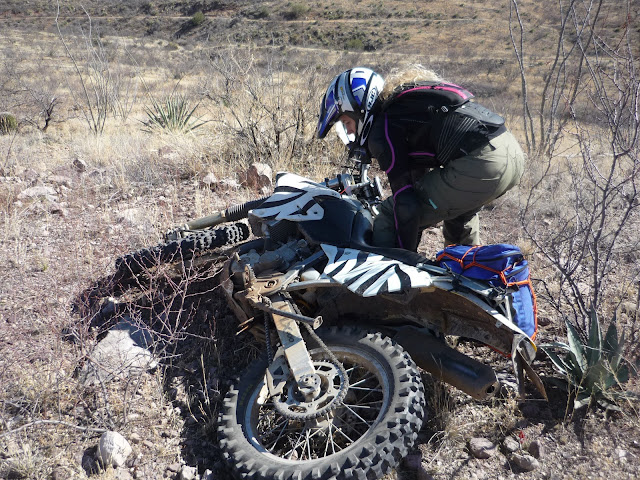 The other fork took us on some very loose rock with twists and climbs.

James coming down a hill where he was scouting better options.

We did a seemingly endless string of loose rock climbs and descents before hitting this gorge.

I wasn’t going back, so I just plowed on through. 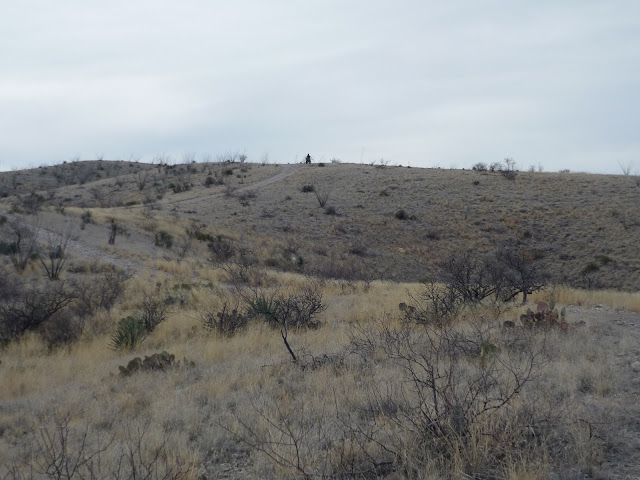 That little dot is me!

When the going got rough, we decided I should lead. That way I could set the pace and James would be right there if I ran into trouble. Well I was zipping along happily and came to a good hill to wait for him. I briefly felt proud that I got up there so far ahead, getting out my camera to catch and action shot of him riding through.

…then I realized I didn’t even -hear- his bike and got worried.
I rode back down and found him trying to fix his homemade rack. 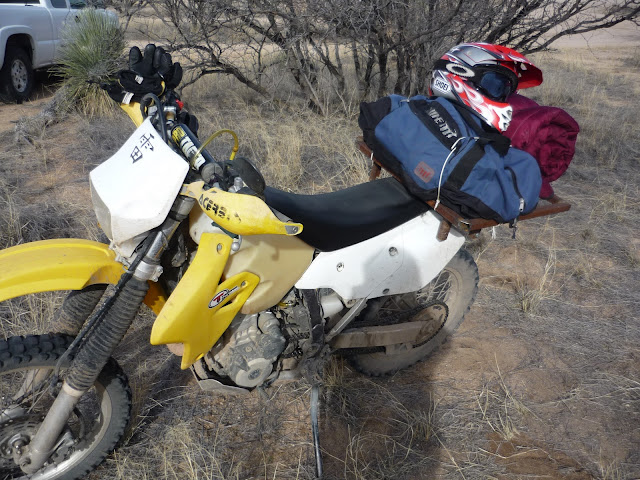 (This picture obviously taken at another time…there were no trucks out where we were…or any signs of life for that matter!
It’s just a prototype. 😉

Eventually he got it secured enough and we carried on.

I got my photo! 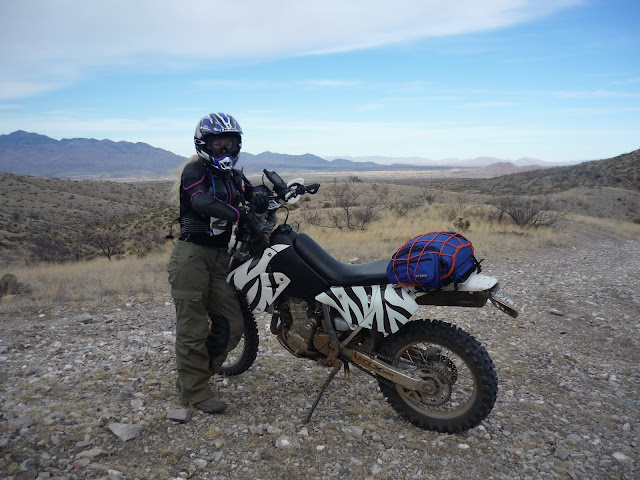 Stopping to rest on a hill.

At this point we decided we had truly turned ourselves around backwards and high-tailing it to the interstate to slab it down to Dragoon was the only hope in making it to the rally before dark. 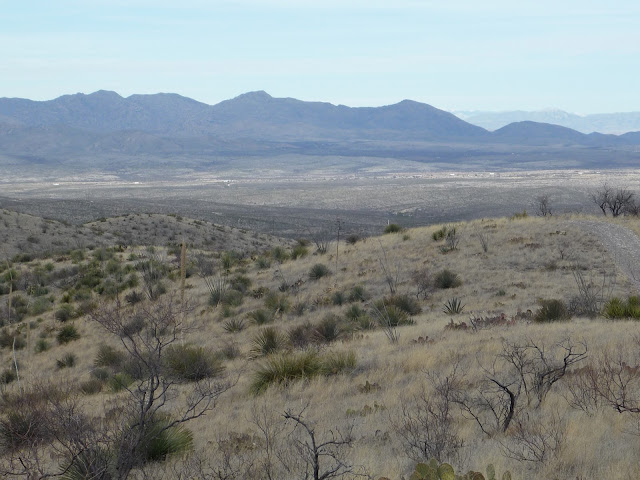 We popped out on the side of the freeway, with semi-trucks flying past and no on ramp. We looked at our little 400’s and then at each other, agreeing this would be far scarier than anything we attempted all day!

We somehow made it to Benson without getting squished, ran into another ADV rider at the gas station and the three of us made our way down to the ranch and set up camp.

I actually had to move the tent because I couldn’t put stakes in here, but dang it looked cool nested in the rocks. The rocks in the Dragoons are truly fantastic!

Sean rolls in after work about the time I’m done setting up…how convenient.

We hung out at the Saloon, cooked hot dogs over the fire and talked about bikes!

There were a ton of people there, I was pleasantly surprised by the turnout!